Product prices and availability are accurate as of the date/time indicated and are subject to change. Any price and availability information displayed on [relevant Amazon Site(s), as applicable] at the time of purchase will apply to the purchase of this product.

Access thousands of Android games and apps via Google Play and enjoy family gaming direct to your TV
Stream arcade quality video games with GameFly streaming
Each console comes with a free, no obligation, GameFly Streaming trial for one month 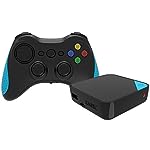 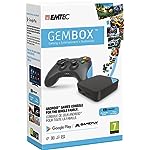 The tiny GEM Box is small enough to fit in the palm of your hand, so you can take it with you anywhere, whether you are visiting friends or going on vacacion. It’s quick and easy to set up, just connect your GEM Box console to your TV and the easy-to-use interface provides you with instant access to all the functions and applications using the ergonomically designed GEM Pad.

The GEM Box games console provides instant access to thousands of Android games and apps from Google Play, as well as console quality games from GameFly Streaming making it suitable for gamers for all levels.

Game streaming is the future of gaming consoles. You are already streaming movies and music, and with the GEM Box, you can now stream video games too. By subscribing to GameFly streaming you can select from a large library of titles at the touch of a button. Gone are the days of having to buy games to be loaded into a machine, instead you just select a game and start playing. New titles are added each month to GameFly so there’s always something new to play. Plus, when you purchase a GEM Box console, you can get a free trial of GameFly streaming for 1 month and without obligation.

Choose from a multitude of Android games and apps available from Google Play, the majority of which are free including many titles suited for kids gaming and family gaming.

Revisit your favorite old school games with a selection of retro emulators. Relive the glory days of classic gaming consoles and travel back in time to experience some of gaming’s greatest hits.

Stream your PC game library collection directly from your PC to your TV. With the GEM Stream app you can now stream from your PC in your bedroom or office directly to the TV in your lounge.

Navigating around the numerous features on the GEM Box is remarkably simple. The easy-to-use, intuitive interface is designed so you can browse menus with ease providing easy access to all the functions and content. Entering information like passwords is quick and easy too, thanks to the exclusive virtual keyboard.

The GEM Box console is so much more than a games console. You can turn your TV into a smart TV and view your favorite websites including YouTube. Miracast enables you to wirelessly mirror smart phone or tablet content to your TV. Photos, videos or music on a USB memory device or microSD card can also be plugged directly into the console to view on your TV.

Inside the box includes:

GEM Box console
GEM Pad Controller
Ethernet cable
HDMI cable
12V Power Supply
Access thousands of Android games and apps via Google Play and enjoy family gaming direct to your TV
Stream arcade quality video games with GameFly streaming
Each console comes with a free, no obligation, GameFly Streaming trial for one month
4 free full version Gameloft games pre-loaded: Asphalt 8, GT Racing 2, Wonder Zoo and My Little Pony
Use the GEM Box console to stream your collection of games from your PC to your TV
Relive the glory days of classic gaming with a selection of retro emulators
Turn your TV into a smart TV and view your favorite websites including YouTube
Wirelessly mirror your multimedia content from your smartphone or tablet to your TV using Miracast and AirPlay
Plug in your microSD card or USB memory device into your GEM Box console to view photos, play music and watch videos on your TV
Features both WiFi, Bluetooth an Ethernet connectivity